skip to main | skip to sidebar

Before the era of radio shock jocks and tv prank-yankers, there was the infamous Charles de Gaulle Hoax of 1958.

It was the first truly great prank call in the history of radio--a doozy of a sting. Broadcast live throughout the Northeast, the faux phone call left one station supremely humiliated, leaving the other--the perpetrator of this mad hoax--basking in smug glory.

In the spring of 1958, New York City radio stations were waging a fierce war for listeners. The combination of rock-and-roll and the transistor radio had made Elvis the King, and AM radio stations--at least those with their ears to the asphalt--were hastily switching formats.

Easy-listening and big bands were out.

One of the first stations to make the switch--in 1956, in fact--was WINS. By 1958, WINS had assembled a legendary line-up of disc jockeys that including Alan Freed, the former Cleveland jock credited with coining the term "rock and roll."

Struggling in the shadow of WINS was low-rated WMGM. The station had once been the proud home of Brooklyn Dodger broadcasts, but the team was gone now, transplanted to Los Angeles that very spring. WMGM's tepid music format combined a bit of rock with easy-listening.

The station was not exactly a strong news-gathering force, either. Without a large news staff, WMGM execs outfitted an old panel truck and assigned two reporters to cruise the streets looking for "scoops." The reporters were dubbed the Minute Men; presumably they would be on the scene of a breaking story in a matter of minutes.

Headlines on the morning of Tuesday, May 28, 1958, concerned big news overseas: The imminent collapse of the French government, and the possibility that Gen. Charles De Gaulle--the popular World War II hero--would seize control of the republic.In the WMGM newsroom, executives decided on a bold move that would prove to New Yorkers that WMGM could be taken seriously as a news-gathering operation.

At 10:30 am, newscaster Bill Edmunds interrupted with this announcement:

"French President Coty is conferring with political leaders after receiving the resignation of Premier Pflimlin. A new government may be created today with General de Gaulle at the helm. WMGM has a call in, long-distance, overseas to General De Gaulle to bring you a direct interview...As soon as that call is completed, we'll put that call right on the air."

Monitoring rival stations' broadcasts is standard practice in the radio business. WMGM's plan to call de Gaulle caused no panic in the WINS newsroom, where it was seen as a desperate act on the part of WMGM. The idea that General de Gaulle would actually return a call to a local New York City radio station was outlandish.

At noon the phone rang at WMGM studios. On the line was an overseas operator--or so she claimed. "Your trans- atlantic call is ready, sir," she said.

"General de Gaulle, this is WMGM in New York City." One could feel the adrenaline in Edmund's voice; they gave out awards for scoops like this. "I would like to know if you would care to make a statement to the American people at this time."

"Yas, I certainly would," said de Gaulle in a heavily French-accented English. "Are we on zee air now?" he asked.

"No sir, we are making a tape to play later, throughout the day and on our newscasts," Edmunds said.

"Well..." There was a pause as the General mulled this over. "No," he said finally, "I would not like to be recorded, as I have not yet granted the French press any of thees informay-shee-own. But I will agree to be broadcast."

"Will you hold, please, and we'll put you directly on the air? Can you do that?" Edmunds was practically begging.

"Yas, but make it very fast as I must go to ze Na-shee-a-nal Assem-blee."

"Just as soon as they give me the go-ahead, General..." In the thirteen seconds of dead-air that followed--an eternity in radio-time--one could hear the engineers scrambling to punch the right buttons.

Then, live, in stentorian tones, Edmunds announced: "I am on the phone with General Charles De Gaulle in France. General de Gaulle, would you care to make a statement about the crisis in France?"

"Thank you Mr. Edmunds," the General began. "I would like to make clear that when I assume pow-air I weel not do so by any dictatorial means. I am too much of an old soldier...and I weel give to the pee-pull of France the government they should have had ever since the war."

Edmunds wasn't about to let the General go just yet. A few more questions. Then de Gaulle broke in: "...Monseuir, can you tell me again whom I am speaking to?"

"WMGM?" the General repeated. "Why, everybody knows the best radio station in New York is WINS." Then he screamed: "Viva la France!"

In the second-and-a-half before the line went dead, in the background, one could hear the unmistakable sounds of hysterical laughter.

Poor Bill Edmunds: Totally nonplussed, unsure what had transpired, unwilling to let go of that award he'd surely have received.

Mercifully, someone at the studio had the presence to kill Edmunds' mike.

By the time New York's afternoon newspapers hit the streets, the incident was front page news. The World-Telegram headline read: "WHO HAD DE GALL TO CALL WMGM?"

"Switchboards at WMGM and WINS were as hot as the French crisis today," the paper declared, " and General Charles de Gaulle was at least partially responsible..." Executives at WMGM, the paper reported, are demanding an immediate investigation by the Federal Communications Commission.

When asked by the World-Telegram for comment, WINS general manager Herb Fearnhead responded blankly, "I don't know a thing about it." Not that WINS was adverse to rubbing it in: The rest of Tuesday afternoon their announcers broadcast the time in French.

Then, on Wednesday morning, a final insult. A telegram arrived at WMGM. Sent from Paris, it read: "I was cut off. What happened? --Charles de Gaulle."

Twenty-six years would pass before anyone fessed up. That's when an assistant program director for WINS admitted that the entire episode, complete with pre-recorded "transatlantic static," was the brainchild of WINS news director Tom O'Brien. And it was O'Brien's fiancee--a stewardess for British Overseas Airlines, stationed in Paris--who authored the bogus telegram.

"The greatest sting in radio history," O'Brien once bragged. Well, it was the first, anyway. Viva la Pranks!

This article originally appeared
in PLUS magazine 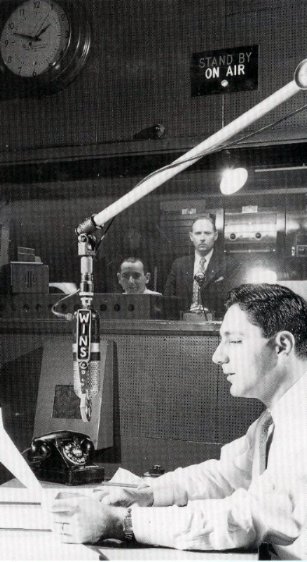 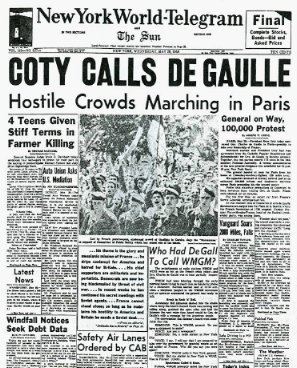 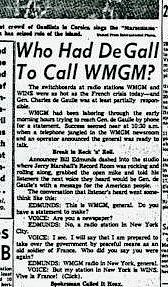 LINKS to Brooks' other websites...

>>The death of Rambunctious the Rutherford Ram
http://www.rutherfordrams.blogspot.com

>>After 73 years, can D.A. Vann be rediscovered? http://www.shermaninvitational.blogspot.com

>>The top 9 ways 9-ball is just like life http://www.nineballbilliards.blogspot.com